Fijian winger and former NRL star Suliasi Vunivalu is expected to make his debut off the bench for the Wallabies.

The side is preparing to face England for the eToro England Series decider in Sydney on Saturday night.

Other Fijians in Dave Rennie’s matchday squad are number eight Rob Valetini, a powerful Marika Koroibete on the wing and centre Samu Kerevi.

Rennie has made four changes to the starting XV with Nick Frost earning his first Test start, and James Slipper returning to the familiar loosehead prop role.

Test centurion Slipper will be joined by David Porecki who plays his first Test in his hometown at hooker with the damaging Taniela Tupou to start at tighthead prop.

Frost will combine with Rebels stalwart Matt Philip in the second row, with Wilson’s inclusion at blindside flanker to complement a backrow that includes captain Michael Hooper and number eight Rob Valetini.

Brumbies duo Nic White and Noah Lolesio will partner in the halves for the third consecutive match, with the former set to bring up his 50th appearance in the gold jersey.

The midfield remains unchanged from last weekend with Samu Kerevi and Hunter Paisami to combine in the centres.

A new look back three sees Hodge at fullback with the fleet-footed Tom Wright and powerful Marika Koroibete on the wings. 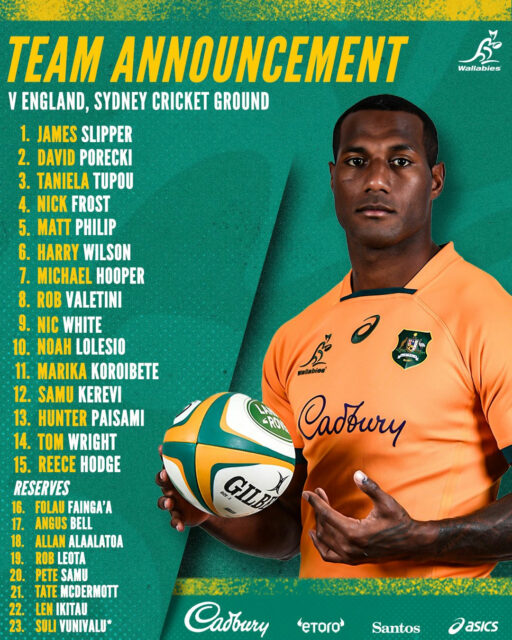