PHOENIX (AP) — Long lines are back at food banks around the U.S. as working Americans overwhelmed by inflation turn to handouts to help feed their families.

With gas prices soaring along with grocery costs, many people are seeking charitable food for the first time, and more are arriving on foot.

Inflation in the U.S. is at a 40-year high and gas prices have been surging since April 2020, with the average cost nationwide briefly hitting $5 a gallon in June. Rapidly rising rents and an end to federal COVID-19 relief have also taken a financial toll.

The food banks, which had started to see some relief as people returned to work after pandemic shutdowns, are struggling to meet the latest need even as federal programs provide less food to distribute, grocery store donations wane and cash gifts don’t go nearly as far. 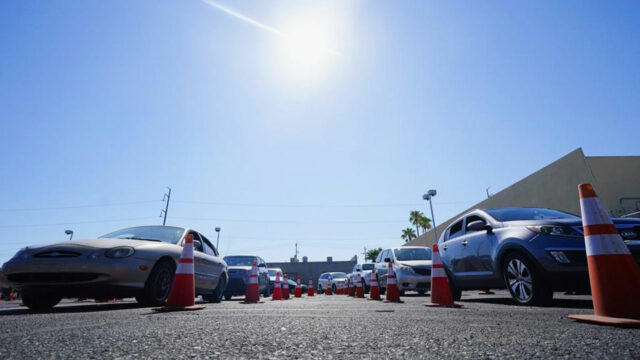 Tomasina John was among hundreds of families lined up in several lanes of cars that went around the block one recent day outside St. Mary’s Food Bank in Phoenix. John said her family had never visited a food bank before because her husband had easily supported her and their four children with his construction work.

“But it’s really impossible to get by now without some help,” said John, who travelled with a neighbour to share gas costs as they idled under a scorching desert sun. “The prices are way too high.”

Jesus Pascual was also in the queue.

“It’s a real struggle,” said Pascual, a janitor who estimated he spends several hundred dollars a month on groceries for him, his wife and their five children aged 11 to 19.

The same scene is repeated across the nation, where food bank workers predict a rough summer keeping ahead of demand.

“It does not look like it’s going to get better overnight,” said Katie Fitzgerald, president and chief operating officer for the national food bank network Feeding America. “Demand is really making the supply challenges complex.” 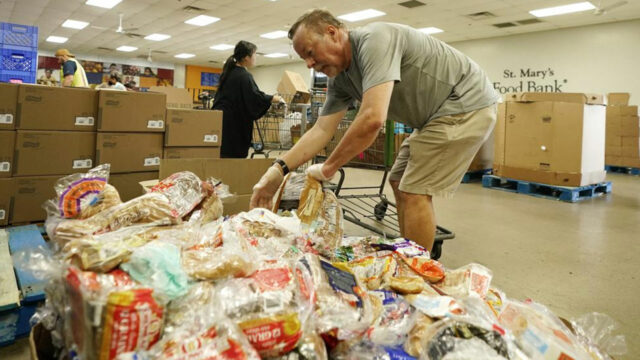 Charitable food distribution has remained far above amounts given away before the coronavirus pandemic, even though demand tapered off somewhat late last year.

Feeding America officials say second-quarter data won’t be ready until August, but they are hearing anecdotally from food banks nationwide that demand is soaring.

More than 900 families line up at the distribution centre every weekday for an emergency government food box stuffed with goods such as canned beans, peanut butter and rice, said, Brown. St. Mary’s adds products purchased with cash donations, as well as food provided by local supermarkets like bread, carrots and pork chops for a combined package worth about $75.

See also  Issuance of TINS not to generate revenue: LTA

At the Houston Food Bank, the largest food bank in the U.S. where food distribution levels earlier in the pandemic briefly peaked at a staggering 1 million pounds a day, an average of 610,000 pounds is now being given out daily. 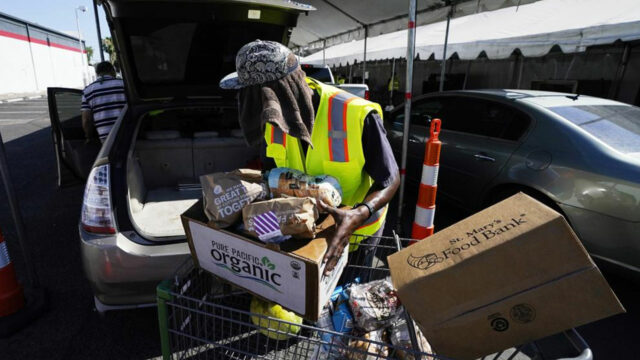 That’s up from about 500,000 pounds a day before the pandemic, said spokeswoman Paula Murphy said.

Murphy said cash donations have not eased, but inflation ensures they don’t go as far.

Food bank executives said the sudden surge in demand caught them off guard.

“Last year, we had expected a decrease in demand for 2022 because the economy had been doing so well,” said Michael Flood, CEO of the Los Angeles Regional Food Bank. “This issue with inflation came on pretty suddenly.”

“A lot of these are people who are working and did OK during the pandemic and maybe even saw their wages go up,” said Flood. “But they have also seen food prices go up beyond their budgets.”

Feeding America’s Fitzgerald is calling on USDA and Congress to find a way to restore hundreds of millions of dollars worth of commodities recently lost with the end of several temporary programs to provide food to people in need. USDA commodities, which generally can represent as much as 30% of the food the banks disperse, accounted for more than 40% of all food distributed in the fiscal year 2021 by the Feeding America network.

During the Trump administration, USDA bought several billions of dollars in pork, apples, dairy, potatoes and other products in a program that gave most of it to food banks. The “Food Purchase & Distribution Program” designed to help American farmers harmed by tariffs and other practices of U.S. trade partners has since ended. There was $1.2 billion authorized for the 2019 fiscal year and another $1.4 billion authorized for fiscal 2020.

Another temporary USDA “Farmers to Families” program that provided emergency relief provided more than 155 million food boxes for families in need across the U.S. during the height of the pandemic before ending on May 31, 2021.

A USDA spokesperson noted the agency is using $400 million from the Build Back Better initiative to establish agreements with states, territories and tribal governments to buy food from local, regional and underserved producers that can be given to food banks, schools and other feeding programs.

For now, there’s enough food, but there might not be in the future, said Michael G. Manning, president and CEO at Greater Baton Rouge Food Bank in Louisiana. He said high fuel costs also make it far more expensive to collect and distribute food.

The USDA’s Coronavirus Food Assistance Program, which included Farmers to Families, was “a boon” for the Alameda County Community Food Bank, providing 5 billion pounds of commodities over a single year, said spokesman Altfest.